Here we are sharing a written update of the Anupama. This serial is very famous and popular among people and it is gunning well with great TRP on television. This episode starts with Anu. She decides to click many photos with her Anupama and Anuj. Anupama also becomes very excited. Anuj asks Anupama if he should take a short course or a long one to reach the camp. Anupama tells the long route. But Anu requests a short route. Anupama worries and here Anuj and Anu enjoy the ride. Here we have more information about the episode and we will share it with you in this article, so please read the full article. 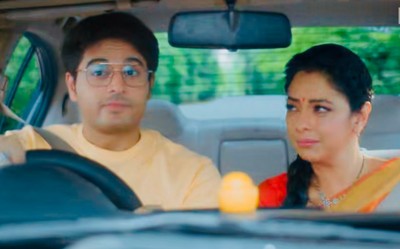 On the other hand, Vanraj sees a change to give to men out there. Their neighbors confront Leela about no noise at shah’s house because it is Pakhi’s wedding. Vanraj says them to focus on their house. Ladies out there say may be new drama at Shah house. Leela says to Vanraj and now they get an opportunity to talk about it behind their back. Vanraj asks Leela not to stress. Adhik asks Pakhi where she has been taking him. Then she asks him to keep his patience. Here Anuj enjoys the music in the car.

Meanwhile, Anupama and Anu also enjoy the sad songs played Anupama sit stressed. Anu asks both what is called split. Anuj tells when two people stay away from each other after that Anu asks if Pakhi and Adhik are separated from them.

Anupama gets shocked.Anuj covers up the talk. Anuj asks Anupama not to feel bad beacuse it is necessary for Pkahi now. On the other hand, Kinjal and Kavya play with Pari. They shockingly call out Shah. Shahs were stunned to see Pakhi and Adhik with their bags.

Later, Anuj and Anupama drop Anu at the camp. Anuj becomes upset then Anupama says Anu’s teacher to take care of her and give her food on time. Teacher assures Anuj and Anupama. Anu says to both if they will come to take her back and if they will not be separated. Anuj and Anupama comfort Anu and they also says her that she should enjoy her camp. Anu[pama’s dress gets stuck and Anupama worries, Anuj talks with her and shares he can relate to Anu’s fear. So don’t forget to watch the full episode of the Anupama. Stay tuned to Social Telecast for more updates.