Here we are sharing a written update of the Anupama. This serial has been running well with great TRP on television. This series is very famous and popular among people. The episode starts with Anuj. Anuj and Anupama make a plan for Pakhi’s wedding. He tells Anu has been getting adamant to become a DJ at the function. Then Anupama says Anu is also trying to copy Anuj. She says Ankush and GK are happy with the marriage. Later Anuj says Vanraj and Barkha are not happy with Pakhi and Adhik’s marriage. Here we have more information about the episode and we will share it with you in this article. 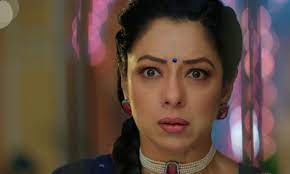 Meanwhile, Anupama says to Anuj that he keeps copying her then Anuj starts flirting with her. Kinjal says to Paritosh that she has to change to Paris happy. Paritosh says thank you to Kinjal for forgetting all the mistakes and she came for Pakhi’s wedding. Kinjal says she came for the wedding and will go back once it is done. Paritosh wishes Kinjal stays back after the wedding. Leela listen to Paritosh and Kinjal’s talk. She decides to stop Kinjal from leaving again. Scroll down the page for more updates and more information about the episode.

On the other hand, Anuj kisses Anupama and they both spend time together. Adhik interrupts and shares about the glam and glitz theme of Sangeet. Anuj also allows. Adhik becomes happy. Anuj asks Anupama to be happy as Pakhi will be in front of her eyes post-wedding also.

Anupama says but one day Pakhi and Adhik have to leave the house. Anuj asks the reason. Then she states as she does not want Adhik and Pakhi to take him for granted. Anuj corrects her and says it has been taken for granted then Anupama says the same.

Here Shah’s family members try to decide on Pakhi’s invitation. Kavya and Leela discuss then Anupama also joins them and she becomes teary seeing the invitation card. Hasmuk says a mother is teary throughout her daughter’s wedding. Leela says even Vanraj is full but he is not reacting. Kavya asks Anupama to help them in selecting the invitation. Leela requests Anupama to talk with Vanraj and take his advice too on the invitation. After that Kavya, Leela and Anupama secretly keep the cards in Vanraj’s room. So don’t forget to watch the full episode of the Anupama on the star plus channel on television. Stay tuned to Social Telecast for more updates.