Hello, all the cinema lovers, so, one of the most awaited movies of the year titled Avatar-The Way of Water arrived at the box office with a bang. As it was assumed that the film has generated immense pre-release buzz in the South Circuits and it wreaked havoc at the southern circuits and emerged as one of the biggest Hollywood openers to date. The film started its box office journey on 16th December 2022 and it seems that it will surpass the numbers of Avengers: Endgame without breaking a sweat. Get more information on Avatar-The Way of Water’s first-day box office collection. 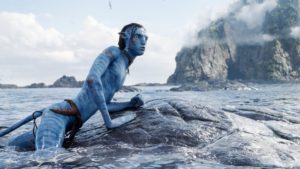 According to the latest updates, the film started shattering box office records from the first day. As we mentioned above that the film hit the ball out of the park in the Southern Circuits along with that it is also doing good in its Hindi version as well. It is following in the footsteps of its prequel which emerged as a huge blockbuster. It registered its name in some of the highest successful films in history and now it seems that its sequel is going to do the same.

As per the reports claimed by trade analysts that the film collected around Rs 40 crores as its first-day box office collection broke collections in all circuits of South India. As we just mentioned that the debut installment of the film is one of the most successful films but The Way of Water has beaten the lifetime collection of Avatar in some circuits like CI, Bihar, and  Assam on its first day. The film is doing commendable business in some significant circuits including Mumbai, Delhi, Punjab, and Bengal. It is assumed that the film will emerge with an unexceptional first weekend.

The first day of the film was really huge because of which it is expected that the film will sustain its rapid pace. Avengers: Endgame started its box office journey with 53.50 crores as the film belonged to the action genre and it stands for a separate fan base. The trade analyst said that the film will experience growth of around 50 to 60 percent.

The film is directed by James Cameron and is produced by James Cameron and Jon Landau under the production banner of Lightstorm Entertainment. The film cast Sam Worthington and Zoe Saldaña in the leading roles. So, book your tickets for the epic science fiction film. Stay tuned with Social Telecast for more information and the latest updates.