Hello, all the Bigg Boss 16 lovers, finally we are here with the exclusive updates of your favorite and highly anticipated TV reality show, as the Thursday, 29th December 2022 episode is bringing high voltage drama along with such activities which will definitely make you feel over the top. Because now, Archna is crossing all the limits of her wording but somewhere she is retaliating as things start with other contestants, and then she participates in all those clashes and her way is wrong while the issue is right in short, her way to retaliate makes everything wrong. 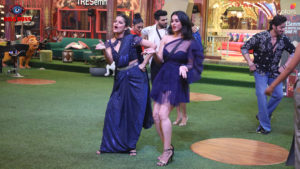 But the entire attention has been grabbed by Sumbul Touqeer as she goes to ask Shalin about the statement he gave behind of her in front of the camera, while she does not like him and does not want him to stand near to her due to such stuff. Initially, Shalin says that he does not want to reply to her for anything as he is busy with Tina. Sumbul passes the remark that when someone does not have the courage then the person makes the excuse in a certain manner he is making and condemns his strategy as well while Tina does not say anything.

Meanwhile, Tina Dutta asks both to not include her in all these as she does not want to be a part of all these as it is their issue and thus it would be better if they solve it without dragging her into the matter. Sumbul agrees and condemns Shalin by saying that if he continuously addresses her as weak so it does not mean she will be affected by all these. So just mind his own business because Sumbul has gone too far from his thinking and will never cry as well so does not he dare to do all these.

In the previous episode, the streamers watched Archna and Shalin got into an ugly argument, where Shalin addresses Archna as 2 rupees girl but Archna also slapped him with the words by mentioning that his wife or girlfriend is having worth of 2 rupees as they got into the relationship with the person who does not know anything that to say what not to say. Shalin gets out of control over all these and starts throwing the items while asking Bigg Boss to send him out. So watch it on Colors TV and for more details stay tuned with us, and do follow Social Telecast.