Hello, all the Bigg Boss 16 enthusiasts, finally we are back with exclusive updates of your favorite and highly controversial TV reality show, as the Friday, 6th January 2022 episode is bringing high voltage drama along with such activities which will make you feel overwhelmed. Because “Shukarvaar ka Vaar” episode is going to prove a bit heavier as the host Salman Khan is coming to make the contestant correct about the stuff which they made during the tasks and roaster days activities, at the time of creating the buzz inside the house. So below you can get further information along with the exact voting poll results. 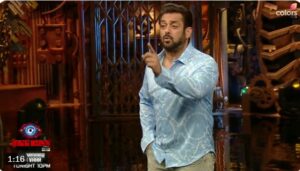 The recent episode begins, where Salman Khan comes and takes the contestants into his class while correcting for all the mistakes they have made during the week, but the entire attention grabs by Tina Dutta and Shalin Bhanot. Because Salman Khan asks Tina about her current relationship status with Shalin because as far as they are watching it is not a friendship and she usually appears while condemning him which seems a bit inappropriate because he is also coming to set the record, Tina replies that they are just friends or nothing else.

Meanwhile, Salman Khan interrupts her and says that she can not lie to him because everything is kept in front of them and thus, she could not prove herself right while turning everything on their hand. Tina asks him about the certain things Salman Khan is asking for, then he unveils that when the dancing was going on between all of them so why she was getting cozy with him if she had a problem with him. Spontaneously, Archna comes between the conversation and says that they are playing the game of false love to go ahead in the Bigg Boss house, in short, she addresses their bond as fake.

After hearing all these, Shalin gets offended and asks Archna to think twice before saying anything, Salman asks him to shut up if he does not know anything because they both are making the audience confused while everything is clear. Shalin asks Salman to not condemn Tina, but not in a clear voice therefore, Salman asks him what he wants to say and says it clearly, Shalin apologizes but Salman Khan shows him his real spot. So watch it on Colors TV and for more details stay tuned with us, and do follow Social Telecast.