Hello, all the Bigg Boss 16 lovers, finally we are here with the exclusive updates of your favorite and highly controversial TV reality show, as the Saturday, 5th November 2022 episode is bringing the high voltage drama along with some over-the-top activities which you al were impatiently waiting for. Because host Salman Khan is set to make the contestants familiar with the flaws which they made during the task and roaster days activity in a certain manner, they are going to repeat if he does not interrupt them. But the entire attention has been grabbed by the eviction. 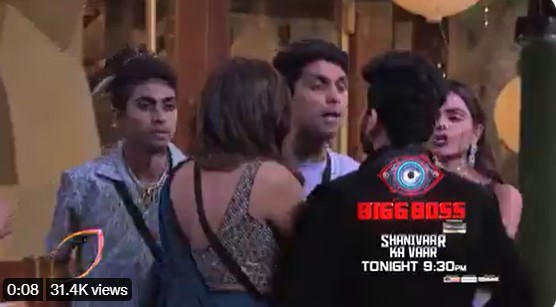 The recent one begins, where Shiv and Priyanka get into an ugly argument as Shiv accuses her that she is the only one who jumps into the issues of everyone, no matter it is connected to her or not, but she wants to enter in everything as she thinks that she is important enough for everyone while anything is like here she is thinking for herself. Priyanka reacts on his statement by saying that he does not need to think about her as she knows everything, so just mind his game while maintaining an arm’s distance from her as she will not bear all these.

Meanwhile, Ankit asks Shiv to shut up and says that they should think about their duties but Shiv starts humiliating him as well, while pointing his finger at Priyanka by saying that if she says something to him so he will give it back to her in full interest.

But Shiv crosses his limits when he addresses Ankit as the parrot of Priyanka whose all controls are held by her and she can make him dance on the fingertips. Priyanka gets offended after hearing all this and says that she is feeling like sending him out if he raises finger at Ankit.

Shiv does not stop which enhances the anger of Priyanka and the rest of the housemates try to make them separate but they continuously throw their lines at each other, while humiliating in a certain manner which is a bit inappropriate according to the other housemates. As they are not understanding anything as continuously fight while Abdu also asks them to shut as still the weekend ka vaar episode is going on and Salman Khan will appear on the screen. So do not miss watching the show on Colors TV at the correct time and for more details stay tuned with us.