It is no doubt to say that the musical reality show Indian Idol 13 has entertained the fans. Ever since its premiere, the show has been a major source of entertainment. In a very short course of time, the reality show has become everyone’s favorite and has managed to garner a decent fan base. The viewers remain eager to know what will happen in the upcoming episode and if you are also in the same section of people, check out the complete article and get all the details about it. 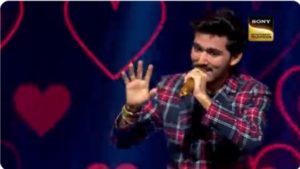 The makers have released several promos on social media that have gone viral and have gained the attention of everyone. As per one of the promos, ace director Mustan Alibhai Burmawalla of Abbas-Mustan fame gifted a Baazigar costume to one of the contestants. Yes, Shivam Singh was the lucky contestant to receive a gift from the director. The guest reportedly got impressed with him after his rendition of the track Be Intehaan from Race 2. For those unversed, Atif Aslam and Sunidhi Chauhan were the original singers of the song. The duo said that they really liked their performance.

The director pointed at Shivam’s sad expressions and asked him why are they sad and if it was because there is no actress with him. It was further added that people in his family told him that he dances very well and that he must see his performance but how he is going to dance as there is no actress there. After listening to the contestant’s melodious voice, the director got impressed and went on to gift him the Baazigar costume. In another promo, the host Aditya Narayan requested Bidipta to give a performance with Shivam.

Apart from him, Himesh Reshammiya requested to deliver the iconic dialogue from the movie Baazigar. Let us tell the viewers that Bollywood directors and brothers Abbas-Mustan are all set to grace the reality show to celebrate Abbas-Mustan’s special episode on the show. The craze for the upcoming episode is quite evident among the fans.

Everyone seems to be quite excited about the episode and is discussing it on social media. Due to this reason, Indian Idol 13 is trending everywhere. Let us add that the show airs on Sony Entertainment Television every weekend. All the contestants are exceptionally talented and will leave no stone unturned to give a great performance. Follow Social Telecast for more updates.