The episode of Kumkum Bhagya of 6th September 2021 begins with the constable and Abhi’s friends visiting his house. They get shocked as they couldn’t believe that he has started to live in such a big house. They ask Abhi about it. Abhi answers that it’s his wife’s place and he will live here from now on. He also adds that his wife has changed now as firstly she was a purse theft but now has become the purse only. On another side, Prachi prepares the Prasad. As soon as she leaves, Rhea comes and mixes crushed garlic in it.

However, Sid also happens to come there and gets suspicious of Rhea. He asks her what was she doing here. Rhea gets startled and excuses herself saying her phone is ringing. Sid notices the phone in her hands only and gets stunned. Here, Abhi’s friends ask why did his wife paid such a huge amount for him and if they knew each other. Abhi lies and says that Pragya might know him but he doesn’t. Meanwhile, Pragya comes there as well. The friends greet her while Abhi informs her that they don’t know her name so are calling her Rani madam. 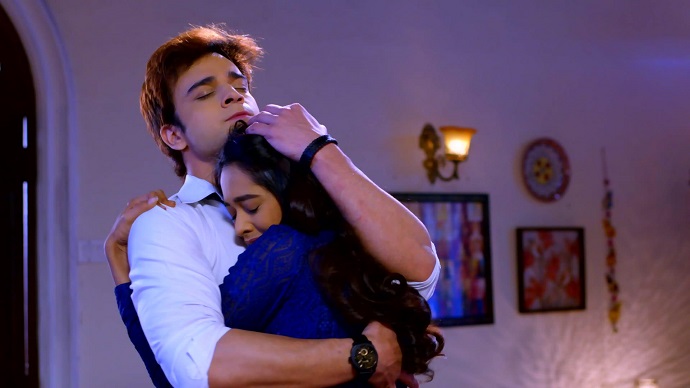 In the next scene, Pallavi and Dida meet the guests. Pallavi asks Ranbeer to ask Prachi and Rhea to come down. As soon as the girls arrive, the guests praise them and say that they are gorgeous. The guests also address them as Radhas. However, Rhea thinks that Prachi can’t be Radha as she is the only one who belongs to Ranbir aka Krishna. Ahead, Pallavi asks the daughters-in-law to dance well as she will give her bangles to the one who will impress her with her moves. They both start dancing to melodious songs. Rhea gets insecure seeing Prachi dancing so gracefully.

Rhea intentionally throws the broken pieces of bangles in Prachi’s way. It hurts Prachi’s feet but she continues to dance. Pallavi notices this and gets scared. She asks Prachi to stop as her feet have started to bleed. Rhea smiles wickedly. On another hand, Abhi brings his friends and the constable inside his house, in the bar area and offers them drinks. Pragya sends snacks by the servant for them. Abhi’s friends ask if his wife has no problem with him drinking in the house. He says that Tanu used to stop him from drinking but Pragya doesn’t mind it. Kumkum Bhagya airs on Zee TV at 9 PM.