The latest episode of the Zee TV serial Kundali Bhagya starts with Rakhi. She asks the hostess to bring the first aid box as she sees intense bleeding. Although, the terrorist stops them from going anywhere. Here, Shrishti and Kareena ask the terrorist if they are unable to see the amount of blood. The terrorist asks them who will go among them when Rakhi tells Preeta that she is a doctor so she can do the basic treatment. However, the terrorist does not believe them and threatens Preeta with severe consequences if she tries doing anything. 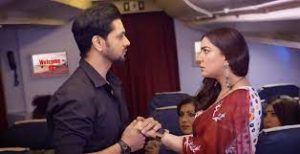 In the next scene, the air hostess leaves with Arjun and Preeta. Here, the terrorist orders everyone to sit and threatens them to not do anything as if they tried anything, they will have to face severe consequences. Rakhi says that Arjun has gotten injured badly and Shrishti and everyone agree with her. However, they still ask her why is she so worried about him knowing he is their enemy. They ask her to keep in mind that he has done wrong to them in the past.

When they all try to convince Rakhi that Arjun is not a nice person, she tells them that he is not as bad as the terrorist. The terrorist gets irritated and asks why are they not getting scared of them. Karina tells them that she is not scared of anyone and that no one can scare her. Rakhi goes on to tell them that if they were her children, she would have improved them. She further adds that she would have slapped them too before going to bed so that they can know what it’s like to hurt others.

Later, the terrorist leader says that he is unable to find the bullets. He then realizes that the gun is empty as they mistakenly put the bullets in another box and get worried. In the next scene, Dadi asks Ganesh to prepare tea for her and asks him to turn on the television too as she wants to know the updates on the news. Meanwhile, Rishab gets a call from Kritika. She tells him about the plane on which the entire family is on has been hijacked. It is no doubt to say that the serial is getting a lot of attention from everyone. Keep watching Kundali Bhagya on Zee TV at 9:30 PM. Stay tuned with Social Telecast for more updates.