In today’s episode of Kundali Bhagya, Shrishti says that she feels there’s some sort of connection between Arjun and Preeta. The latter hears it and asks her if she has gone mad. She adds that Arjun happens to be the same man because whom Kavya’s life has gotten into danger plenty of times. Shrishti listens to Preeta and asks her to recall those days when Arjun saved Kavya’s life and asks if she has forgotten all of that. She says that she does not understand what’s wrong with Preeta. 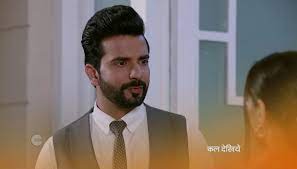 Shrishti goes on to say that even Rishab is supporting her and asks her to think that Arjun has never harmed neither her or Kavya so he is not like what she thinks of him. Preeta gets uncomfortable with those kinds of talks and due to this reason, she tries to go away. Shrishti tells her that running away from the truth won’t change it. Preeta says that she is talking strangely today and that she can not bear it anymore. Preeta even tries to scold Shrishti. Meanwhile, Sameer comes with Kavya. He gestures to Preeta to talk slowly.

In the next scene, Kavya tells Preeta that she is going to have some ice cream with Sameer. The latter asks Preeta to go to the doctor as he is calling her. Here, Shrishti is tense. Sameer notices that and asks her what has happened to her to which replies “nothing”. Later, she gets a call. Shrishti thinks that it must have Rakhi’s mother. Anjali, here, replies that she does not trust the doctor. Dadi asks her why she feels that way. Anjali says that he is still affected by the poison. Before the doctor could say anything, Anjali says that she wants to meet Preeta.

Preeta asks Anjali if she is in her senses to which she says that she does not think the doctor heard her saying anything in her sleep. Here, it is shown that the doctor threatens them to follow his instructions as they might have severe consequences if they went against him. Later, in the scene, Anjali is lying on the hospital bed while Preeta slowly walks close to her and begins to cry. Arjun sees her and asks her what happened to her that has resulted in her crying. Keep following Social Telecast for more updates and the latest news. Stay tuned to this space!