One pilot has, unfortunately, died in a tragic plane crash. The fatal incident took place in Madhya Pradesh, Rewa. In the plane, two pilots were present where one died while the other got injured. It is reported that they were flying and sadly, the plane crashed into a temple in MP. The incident resulted in the death of a pilot while injuring another. The matter has surfaced all over the internet and has garnered everyone’s attention. In the article below, get all the information related to the matter and get updates. 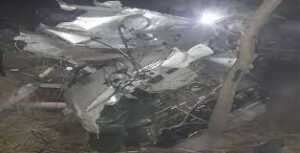 According to reports, the accident occurred this morning. It is coming forward that the flight was a training flight. The information of the saddening piece of news was provided by Rewa SP Navneet Bhasin. Reports confirm that the plane that belonged to a private company was taxiing from Chorhata Airstrip. It was that moment when it crashed as it ended up colliding with the dome of a temple. The temple was situated in Dumri Village of Rewa district.

Speaking of the incident, Rewa SP said that during the training, the plane collided with a temple which caused a pilot’s death. Adding further, SP said that the injured pilot is admitted to Sanjay Gandhi Medical Hospital and is receiving treatment there. Navneet Bhasin said that he will soon recover as he has not sustained life-threatening injuries. On another side, a team of police personnel reached the spot where the saddening incident happened.

After the investigation, it has come forward that Prima facie, bad weather and fog conditions could be the reason behind the crash. Apart from this, not much information is shared regarding the fatal crash as the investigation seems to be ongoing. Currently, the Madhya Pradesh aircraft crash news is surfacing all over the internet and is grabbing everyone’s attention. People who were close to the pilots and their well-wishers are coming to social media to pay the deceased pilot heartfelt tributes and to offer their deepest condolences to his family and close ones.

Needless to say, the matter has become one of the subjects of discussion on the internet and is trending on multiple platforms. As mentioned above, we do not have enough information about the fatal crash at this very moment and we assure our readers to update once we receive any sort of information. Till then, stay tuned with Social Telecast to get more such updates and the latest news.