The police authorities have recently arrested five people. The arrested fellows include two 18-year-old men, and three 17-year-old boys after a deadly shooting occurred at the Mall of America on Friday evening, December 23. According to the latest reports, the accused culprits, who allegedly killed a 19-year-old African-American man, stopped for food at White Castle. 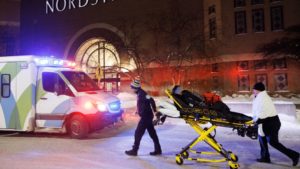 Bloomington Police Chief Booker Hodges spoke about this harrowing incident. He stated that “The people we arrested here after the shooting, appears that they felt it was necessary to get something to eat. So they went to White Castle … and got a crave pack,” all these reports are through the popular media outlet New York Post. Speaking about the deadly attack, he further continued and stated, “this deadly firearms-related homicide in the history of Mall of America.” It is the second murder case in the mall of America ever, the first deadly homicide happened in the year 1999 domestic-related stabbing.

Although the identities of the 17-year-old minors are not released by the authorities as of now, because they are considered juvenile suspects. Reports have further continued and stated that one of the 18-year-olds is believed to be the shooter, while the other suspect might also have fired a weapon.

Police officials believe that this deadly homicide is the result of a long ongoing feud between the accused and the victim. This news has been very devastating and shattering for everyone. Shooting and such incidents rise questions about the negligence of the security personnel at the mall. There is not much information about the victim at the moment. Our research team is currently trying to get more information about the victim. The police have not released further information regarding this incident. Although we can expect some more reports coming out through police authorities. We will let you know all the updates and developments in this case. For all the latest national and international updates, news and information stay tuned with us.