In recent news, a fire broke out at the largest shopping center in a suburb of the capital, Moscow. The Russian firefighters are reportedly trying to extinguish the massive blaze. Reports confirm that the fire resulted in the malls collapsing and one person dying. The incident happened in the early hours of Friday, December 9, 2022. It is no doubt to say that the matter has spread all over the internet and has brought everyone’s attention to it. Check how did the incident happen and what happened in the article below. 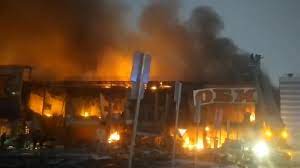 According to the authorities, the fire started to spread over an area of about 7,000 square meters in the Mega Khimki shopping and entertainment center. Taking to Twitter, Nexta TV posted the video of the terrifying incident. Within some time, the video went viral and managed to gain the attention of netizens all around. Let us tell you that videos on social media showed a huge fire with people fleeing the burning building into a parking lot. Before the companies’ departure from Russia in the wake of the Ukraine war, including one of the first IKEA stores in the Moscow area, Khimki had been home to a large number of western retail chains.

"Mega Khimki" shopping center is on fire and exploding in Moscow 🔥🔥🔥

Talking about the incident, the fire reportedly spread over an area of about 7,000 square meters in the Mega Khimki shopping and entertainment center. Sergey Poletykin, the head of the Russian emergencies ministry reported that the deadly fire claimed one person’s life.

The fire was put down at 10:45 AM. After the news of the massive fire breaking out surfaced on the internet, more than 70 firefighters and 20 fire trucks were sent to the site to handle the situation. Emergency services said that the design of the building hampered the work.

The authorities further said that the building was located about 7 km (4 miles) from Moscow’s Sheremetyevo Airport. They further said that due to the collapse of the roof, the fire spread instantly to a large area. The information was shared on Moscow’s region’s emergency services. Currently, the cause of the fire has not been revealed yet. Russia’s Investigative Committee happen to be looking into the case so that they can determine the reason behind the fire breaking out. Keep following Social Telecast for more such updates and the latest news happening around the world.