The highly anticipated series Kaleidoscope has gotten fans excited about its release. Because of its unique timeline, the viewers are getting attracted to it and needless to say that they are eagerly waiting for the series to premiere on Netflix. Its trailer has already thrilled the fans who are discussing it on their respective social media. Are you also curious to know when this amazing series will premiere on the giant streaming platform? Well, if that happens to be the case, check out the complete article below and grab all the details. 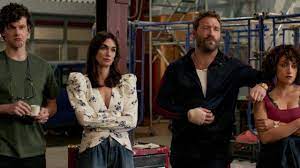 The show’s plot, according to the teaser, is centered on a bunch of novice thieves who accept an invitation from Leo Pap to heist America’s most secure bank, which they claim to be the safest bank in the entire world. Leo Pap is a pro at what he does and has a dreadful history with one of Manhattan’s wealthiest residents. As they play cat and mouse with an FBI agent named Nazan, the burglary gang intends to steal US $70 billion from the bank.

Each thief hired by Pap has a different history and a specific set of skills for robbing banks. Eric Garcia, who has previously worked on projects like Matchstick Men (2003), The Autopsy of Jane Doe (2016), and Strange But True, is the creator of the limited American heist drama series Kaleidoscope, formerly known as Jigsaw, for Netflix (2019). The show is partially based on the true account of how bonds worth $70 billion disappeared from Manhattan during Hurricane Sandy.

The limited series, on the other hand, drastically changes the chronology, starting 24 years before the theft and ending six months later. Giancarlo Esposito and Paz Vega are the stars of the Netflix original series’ all-star cast in the key roles. Rosaline Elbay, Niousha Noor, Peter Mark Kendall, Tati Gabrielle, Jai Courtney, Rufus Sewell, and Jordan Mendoza all seem to play supporting but very important roles. Let us tell you that Kaleidoscope will be released on Sunday, January 1, 2023.

It will contain eight episodes that will entertain the viewers. Garcia, Ridley Scott, David W. Zucker, Jordan Sheehan, Fred Berger, Brian Kavanaugh-Jones, Justin Levy, and Russell Fine serve as executive producers on the film Kaleidoscope, which is made by Scott Free Productions and Automatik Entertainment. Keep following Social Telecast for more updates and the latest and trending news.