Nima Denzongpa Today’s Episode starts With Varun is eating food and Tulika is still doubted Suresh that he is being engaged with another girl. Varun then says that you are talking about one woman I have seen him with three other girls. Tulika gets amazed and asks more about that, Varun says that I saw him with Sia, Manya, and Nari, Tulika scolds him and asks him to don’t be over smart with me. Sunita comes there and says that Nima is using her daughter to get close to Suresh. Varun says that he was showering love on them. Sunita asks Tulika to not spare Varun for that, but Tulika says that she will teach a lesson to Nima. 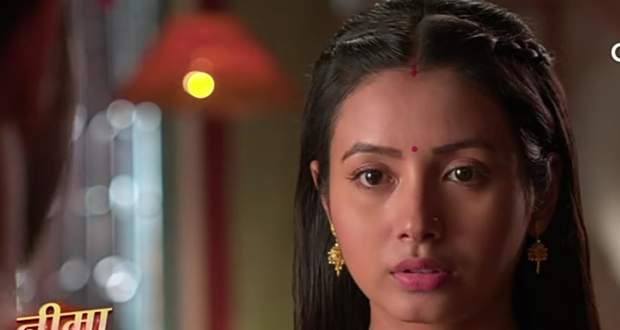 Nima there was working at Siman’s house and tells her cook that we are having some guests tonight, so make something special for them. The cook replies that he isn’t feeling well and he is worrying that he can’t cook today. Sarla asks Baaky to check Das, Baaky says that he has a high fever. Sarla asks Das to leave immediately and take some rest. He asks then who will cook, Baaky says Nima can manage it, Suman requests Nima to take care of dinner. Nima gets agreed.

Manya along with Sia go to submit her documents, she submitted documents and received her joining letter. Manya congratulates her and teases her for Shiv. Sia says that it isn’t like that. Just then Shiv comes there and congratulates Sia for her job. After some gossips, Shiv invited them to an office party. Sia was hesitating, but Manya says we will come. Nima returns home and sees Manya is arranging her almirah. Nima praises Manya in between Naari says she is Manya she doesn’t do anything without any reason. Meanwhile, Sia comes and shows her joining letter to  Nima. She gets elated seeing it.

Mania then informs Nima that one of her colleagues invited us to the annual party tomorrow at her office. Nima gets angry and scolds them, she says no need to go to the party. She further says just go to the office and mind with your won business. Nima leaves and Naari started laughing at Manya. The next morning, Nima telling Sarla about the office party and tells her that she denies her. Sarla makes Nima understands that Manya was right and let them go for the office party and it is common in offices. Tune in to Colors at 9 PM and watch the complete episode. Stay connected with Social Telecast and don’t miss any Nima Denzongpa written update.