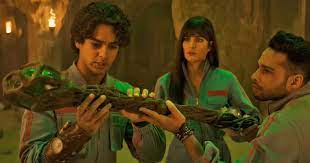 According to the latest box office reports, Katrina Kaif starer received the wonderful advantage of the major holiday Guru Nanak Jayanti on Tuesday. The horror-comedy film experienced splendid growth on its first Tuesday and raked commendable figures. The film collected around 1.15 crores which took its total to 9.25 crores within 5 days. Along with that, the film is also taking advantage of facing no significant competition at the box office and being a family entertainer. The film soon faces some competition in the upcoming weeks because of the arrival of some new releases.

The film started its theatrical journey on 4th November 2022 and gained ₹1.85 crores as its first-day box office collection. It experienced growth on its second day amassing ₹2.50 crores. It sustained its pace on its third day and raked ₹2.75 crores and took its total to ₹7.10 crores. The film managed to remain constant on its first Monday and obtained decent marks with ₹1 crore. As we informed the advantage on major Holiday and minted ₹1.15 crores took its total to 9.25 crores. The film is currently strong on with a worldwide box office collection of ₹14.8 crores leaving the rest of the films behind.

The phone Booth is directed by Gurmeet Singh and produced by Ritesh Sidhwani under the production banner of Excel Entertainment. The cinematography of the film is done by K U Mohanan while the edited by Manan Ashwin Mehta. The music of the film is composed by Mikey McCleary.

Apart from Katrina Kaif, the film cast some the talented stars of the film industry including Ishaan Khatter and Siddhant Chaturvedi. So, if you looking for a family horror comedy film you can go for Phone Bhoot. Stay tuned with Social Telecast for more information and the latest entertainment updates.