In recent news, the mother of Beth Mead passed away. The England international announced the saddening piece of news and said that June has died. Expressing her grief about her mother’s death, Beth said that if love could have saved her, she would have lived forever. It is no doubt to say that not just Beth but everyone who loved June is equally saddened to learn about the mishap. In this article, let us find out what was her cause of death and how did she die. Read the full article to the end. 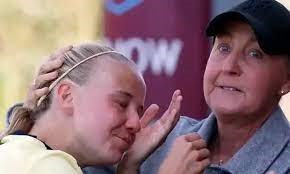 Taking to Twitter, the English football player Beth Mead shared pictures with her mother and wrote that they love her lots, forever & always. The post has gotten a lot of engagement from the netizens and everyone is coming to the front and is expressing her sadness. Talking about her mother in an interview with BBC Sport in November, she called her mother as her “biggest motivation”. She further said that the strength that her mother has given her is just incredible.

“It was amazing to get the trophies and celebrate in front of all the fans but for me, I could not wait to get round the stadium to then get to my mum, dad, and brother and cherish and share that moment with them”, added Beth further. As mentioned, the Arsenal player confirmed the news of her passing last Saturday. Since then, tributes have poured in for her on social media as everyone is coming forward and paying her heartfelt tributes. It is coming forward that June was battling cancer for a long time and despite receiving treatment in a reputed hospital, she could not be saved.

Apart from Twitter, Beth Mead posted on Instagram too where she wrote that thought long and hard about what to write but there will never be any words that will do justice. She further said that on January 7, 2023, at 1 AM, her beautiful, kind, funny mother and wife passed away after a long & brave battle against Ovarian Cancer. In her final moments, she was surrounded by herself, her brother, and her father. Our hearts are broken, there will be a piece missing forever but heaven has now gained a special angel. Now, everyone is paying her heartfelt tributes and respects. Follow Social Telecast for more updates.