On Friday, December 23, 2022, Kaikala Satyanarayana passed away. The legendary Telugu actor was 87 at the time of his death. It is reported that he breathed his last at his Filmnagar residence in the wee hours of Friday. Tributes have poured in for the veteran actor on social media. His fans and well-wishers are coming forward and are expressing their deepest sadness and grief on his unfortunate demise. It is no doubt to say that the entire Telugu film industry is currently mourning the actor’s death. Check what was his cause of death and more about him in the article below. 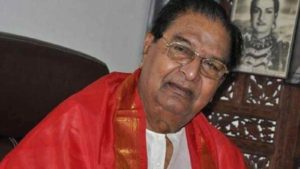 According to reports, Kaikala was receiving treatment in a well-known hospital. In November 2021, he was admitted to the said hospital. Sources confirm that he was on respiratory support at home after suffering from post-Covid complications. Besides, the actor was also admitted in October 2021. It was said that he suffered a fall at his residence that eventually deteriorated his health. Taking his condition into consideration, the family immediately took him to the nearest hospital so that he can receive treatment on time and recover from the injuries he sustained after the fall.

However, now, it is coming forward that the Telugu actor has taken his last breath in the early hours of Friday and has left his family and loved ones in profound grief. No one seems to believe the fact that he has gone and ever since the news of his passing broke out on social media, tributary posts and condolence messages flooded the internet. Several personalities expressed their heartfelt tributes to the late actor and prayed for the peace of his soul. Satyanarayana’s name also happens to be trending on multiple platforms.

Talking about the actor, Kaikala Satyanarayana started his career in 1959 with Sipayi Kuthuru. He was last seen in Maharishi, a film that featured Mahesh Babu. Needless to say, the actor appeared in plenty of films and projects in his five-decade film career. He went on to play many memorable characters as an antagonist, supporting artiste, and solo hero.

Some of his well-known films include Sri Krishnarjuna Yuddham, Adavi Ramudu, Yamudiki Mogudu, Gang Leader, Anveshana, Yamleela, Murari, and many more. Besides acting, he also tries his hand at production and excelled in that. Kaikala’s death has become one of the subjects of discussions on the internet now. Social Telecast also comes to the front and pays him sincere respects and tributes.