According to the latest reports, the officials have detained a total of 3 white men in South Africa. The news came forward after a video featuring black teenagers being attacked at a public pool surfaced online. The said video clip has garnered more than 6 million views on social media and it is needless to say, the matter has become the subject of interest among the netizens. Identified as Johan Nel and Jan Stephanus, it is said that they were the attackers of the teenagers. Check the complete details of the matter in the article below. 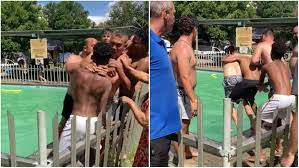 It is reported that a group of white men hit, choke, and push black teenagers into the pool. Now, the video clip of the saddening incident has surfaced on the internet. Sources state that the white men were trying to prevent the teens from swimming as they claimed that it was reserved for white people. The video, which has become the subject of discussion among everyone, has been uploaded on Twitter. It has obtained more than 6 million views with endless comments as netizens are slamming the incident, calling it nothing but racism.

With more than 34K likes, the incident has drawn widespread criticism online. Not just locals but President of South Africa, Cyril Ramaphosa has also criticized the event. Releasing a statement, the president said that as Black and White South Africans, everyone should be united in condemning all manifestations of racism and attempts to explain or defend such crimes. Adding further, Mr. Ramphosa said that racism is not a problem to be fought by Black South Africans only.

Let us mention that the video of the incident was shared by Tumii Frost on Twitter. Posting the video, she wrote that the family came to spend the day at Maselspoort Resort and Conference Centre in Free State. Tumii went on to write that her brothers were attacked by the so-called grown men because they are apparently not allowed in the pool as it is reserved for the “white people” only. As the matter gained worldwide attention in a very short course of time, the officials began their investigation into it.

Reports confirm that the 47-year-old suspect Kobus Johannes Classen faces charges of attempted murder. He was produced before the court on Thursday, December 29, 2022, and was further released on a bail of 20,000 South African rands. His next hearing has been set for January 25. Johan Nel, 33, and Jan Stephanus, 47, were also charged with common assault. Follow Social Telecast for more updates.