In recent news, a teenager was stabbed at the junction between Peckham High Street and Rye Lane. The terrifying incident happened in broad daylight. It is no doubt to say that the passersby were terrified after witnessing the incident. Reports claim that it was a double stabbing that resulted in the teen sustaining multiple injuries. The news has surfaced all over the internet and has brought everyone’s attention to it. Let us check what happened to the teen and why was he stabbed along with finding the motive behind the incident in the article below. 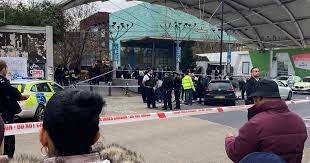 According to reports, a teenager was stabbed in broad daylight at the junction between Peckham High Street and Rye Lane. Since the incident was quite concerning, the officials soon began their respective investigations into the matter. After investigating, the cops arrested two men in connection to the case. It is coming forward that the injured teen was taken to the nearby hospital on Friday, December 2, 2022, at around 1 PM. Police officials have released a statement in which they said that the teen boy definitely received wounds but since he was admitted to the hospital, he recovered from those.

As per reports, the 20-year-old boy’s condition is not life-threatening and he seems to be doing fine. As mentioned, two men have been arrested by the officials in connection to the teen stabbing case. However, the cops have not disclosed their identities yet so it is not known whether they knew the victim or not. It is said that their identities will be revealed once the cops prove their involvement in the case. Sources confirm that the suspects have been taken into custody and are being interrogated by the officials.

Speaking of the incident, a Met Police spokesperson said that the cops were called at 12:57 hrs on Friday, December 2, 2022, to reports of a stabbing at the junction of Peckham High Street and Rye Lane. It was further added that the officers attended along with the London Ambulance Service. Some sources claim that the victim was 19 while many states that he was 20. Currently, not many details about the incident have come forward so people have to wait until the cops release any information regarding the case. Besides, nothing about the victim or his family has also been revealed yet. Stay connected with Social Telecast for more such updates and the latest news.