In the upcoming episode of the popular comedy show of Sony TV, “The Kapil Sharma Show”, the viewers will witness the controversial Bollywood actress Kangana Ranaut. The Indian film actress will grace the sets of the show in a beautiful yellow Saree to promote her forthcoming film titled “Thalaivii”. The channel has dropped some hilarious and entertaining promos that are garnering good responses from the viewers. Well, let’s see who is coming along with Kangana and what funny elements will be seen in tonight’s episode of TKSS. Take a quick look at the article. 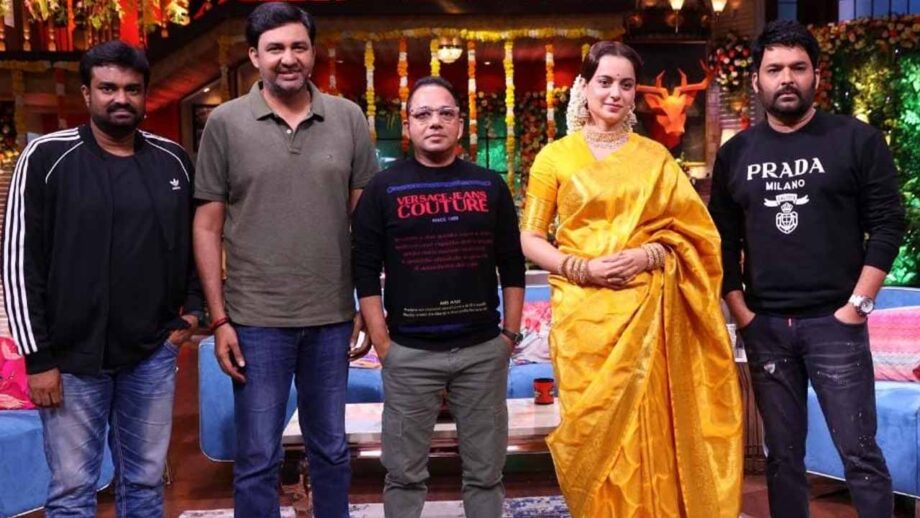 Looking absolutely gorgeous in a mustard Kanjivaram Saree, the Queen fame actress Kangana received a warm welcome from the host Kapil and the judge Archana Puran Singh. Pulling Kangana’s legs, Kapil asks what a person has to do to receive such high security. However, the 34-years-old actress was quick to reply that you only need to speak the truth. Undoubtedly, her witty answer took everyone to a surprise and got a good laugh from everyone as well. Next, Kapil is seen holding a fire extinguisher in his hands that makes the actress quite curious about it. She asks him about it.

The comedian Kapil replies that he is carrying this along as he has heard that wherever the actress visit, she brings fire along with. Well, Kapil’s hilarious reply hinted towards the controversies Kangana had got into in the past. Despite being offended or triggered, the Fashion actress burst into laughter along with Archana and the arrived audiences. The interesting questions don’t just end here as Kapil further asks Kangana how does she feel knowing she has not been in any controversy for quite some time now. The questions left Kangana in splits and she couldn’t control her laughter.

Besides Kapil and Kangana’s fun-filled conversation, the other artists will also arrive to entertain the special guest. Be it, Bharti Singh or Chandan Prabhakar, all the comic personalities will add fun elements in the upcoming episode. Kangana Ranaut will share the stories behind her film Thalaivii that is solely based on the popular actress and politician Jayalalithaa. The film has already gotten released on September 10, 2021, and the makers are expecting it to be a huge hit considering the controversies it came into previously. It’s no doubt the today’s episode of The Kapil Sharma Show is going to be quite entertaining and engaging. It will be telecasted on Sony TV at 9:30 PM.