Brielle Biermann, a 24-years-old American TV personality, has recently landed in the headlines. She took to her Instagram handle and shared that she underwent double jaw surgery. Yes, it might come as a shocker to many but the television personality has announced it on her account on August 23, 2021. With a series of pictures, she also added a lengthy caption where she informed the general public about what she had been going through. Some sections of people are still confused about the entire thing as to why Brielle underwent surgery and if she was suffering from something. Here’s everything we know about it. 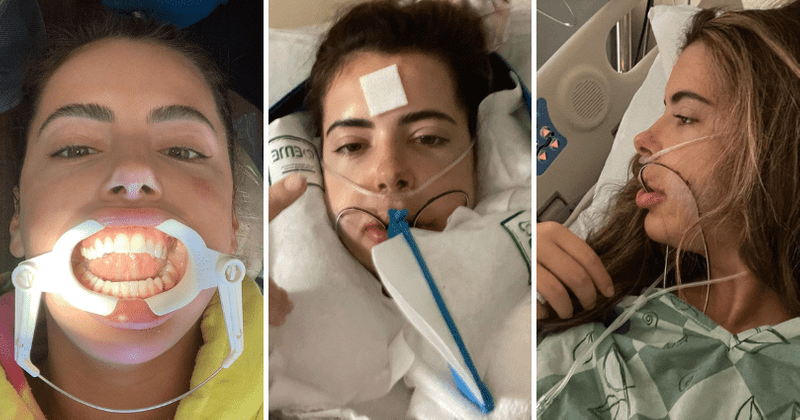 forward that the TV personality was suffering from overbite and TMJ. Known as Temporomandibular disorder (TMD), TMJ functions as a connection to the skull and jawbone. It can be caused by excessive strain on the jawbones or particularly the muscle groups that control functions such as swallowing, chewing and even speech. Brielle has been reportedly suffering from the same for a long time. Sharing the post, Biermann wrote that she had double jaw surgery, also called a bimaxillary osteotomy, to treat her TMJ and 9mm overjet overbite.

The popular personality cleared that she did not go through the surgery for aesthetics but for the standard of life. She shared that she had the habit to suck her thumb till she turned 9. The habit resulted in making the mouth’s roof extremely narrow. Brielle added that she had to use her tongue to eat anything be it burgers or pizza and asked how would it feel if you always have to take the help of your tongue to eat and choke every time you consume something. Brielle further wrote that she decided to undergo surgery and in the beginning, she was really scared about it.

However, she got immense support from her close friends and family who encouraged her. As per her post, she would get better in 4 weeks and will start eating whatever she feels like. The 24-years-old posted a series of post-surgery pictures that looked quite shocking. In some pictures, Brielle is seen covered in bandages, wires, tubes and ice-packs around her face while she was in a hospital bed. The post had garnered almost 80K likes with more than 2K comments. Brielle Biermann is quite popular on Instagram and has 1 million followers on the app. The reality TV star has been called out so many times for undergoing surgery which the latter had always denied.