Hello, all the daily soap enthusiasts, finally we are back with exclusive updates of your favorite TV drama “Udaariyaan” which will make you feel overwhelmed as the Saturday, 17th December 2022 episode is bringing the high voltage drama along with some over-the-top activities. Because Advait has married Nehmat, she will now leave her house as farewell is around the corner. But she cannot forgive all those golden memories she made with Ekam and their golden moments were highly impacted, which is currently bothering Nehmat as she is getting over that. 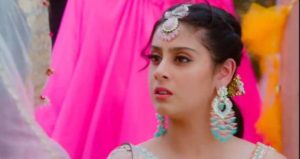 Meanwhile, Nehmat wonders that now she has initiated her new life with Advait and thus she will have to overcome no matter what happens but in all these, Advait is innocent and thus she could not ruin his life she will need to behave gently with him and family because now they are her everything. In short, Nehamt is ready to change herself while forgetting all those memories which she created in her past because no matter what but now it does not make any sense. So, therefore, it would be better if she accepts everything while ignoring the stuff as she has married to him and taken a step in life.

After a while, Advait thinks to put some oil into the heated argument between Nehmat and Ekam as now they are seeing their faces, so he sends the sweets of their wedding to the police station through an officer and asks to feed Ekam no matter what happens. So he follows the order and gives the sweet to Advait by saying that Advait sends it for him as their house got a new daughter-in-law and his dream wife. In short, Advait makes Ekam jealous as he got everything that Ekam wanted to get in short, Advait married Nehmat.

Later, Advait asks Nehmat to come with him as he wants to take her for the ride and spontaneously he sees Ekam there and gets another chance to flax his closeness with Nehmat. Therefore, he enhances his car’s speed and tries to go ahead of him but Ekam does not like him and begins the race as he wants to make him defeat no matter what happens. But Advait is quite stubborn and hence he also tries to go ahead so that, he can not be defeated by Ekam. So watch it on Colors TV and for more details stay tuned with us to know more.