Hello, all the Udaariyaan lovers, finally we are back with exclusive updates of your favorite and highly dramatic TV show, as the Thursday, 29th December 2022 episode is bringing high voltage drama along with such activities which will make you feel overwhelmed for sure. As Naaz has been threatened Advait to take his steps back from the current election as she does not want him to be part of the assembly as her boyfriend Nikhil is coming to rule the elections at his fingertips, so thus, he needs to take his steps back before its too late otherwise she will have to do something. 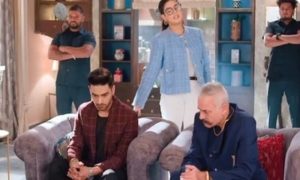 After hearing all this, Adavit asks her to stop as he is not here to hear such nonsense and the way she is giving him a warning is quite childish thus, he warns her back to take her own steps back because the election will be gone under the favor of his family and a new leader will come out from their close ones. In short, Advait retaliates with Naaz because till now, he is unaware of her ace of space which she is holding for a very long and was waiting to show, therefore, she asks him to have a look on certain things she brought especially for him.

Meanwhile, she mentions that she will ruin the life of Nehmat and his family after making the stuff viral that she had a serious affair with Ekam before getting married, and she will add some more spices into the matter so he can imagine how would it be worst for the two and therefore, if he wants to make her save along with his family then he is not having any option as he will have to accept all the conditions otherwise she will be helpless to execute the conspiracies against him and Nehmat, and he will be the responsible for all that.

After a while, Advait reaches home and makes Nehmat aware of Naaz’s plan by saying that they will have to be careful as she is doing certain things with the help of her mother Jasmine, and everyone is acquainted with her past. Nehmat asks him what can she do in all these as she wants to help him but Advait says that they will need to think a bit deeper because Naaz is having such evidence which are enough to defame his family. So do not miss watching it on Colors TV and for more details stay tuned with us, do follow Social Telecast.