Hello, all the daily soap enthusiasts, finally your favorite and highly anticipated TV drama Udaariyaan is all set to make you feel over the top, as the Friday, 9th of December 2022 episode is bringing the high voltage drama along with some unexpected activities. Because finally, Nehmat has been exposed of having something with Advait as their photos have come to the fore in a certain manner that everyone is condemning her actions. Even, Malika’s mother is cursing her for not getting happiness in the future as she destroyed her daughter’s dream to get married. 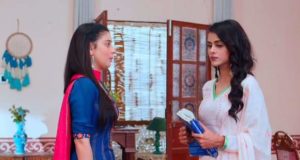 Meanwhile, Malika’s mother throws Nehmat out the threshold of her house and warns that if she makes her appearance again nearby the venue or her family she will make sure she should arrest. Rupi is getting hyper as his grandchild is getting humiliated by someone outsider, but he is helpless as he can not say even a single word because of Nehmat’s exploit. Because she was the one who appeared last in Malika’s room and after that, she got disappeared this is the reason, all blame is coming to her head and this is the reason, it would be better to remain shut.

At the same time, Shailey finds the chance and passes such remarks against Nehmat by saying that if she saw Malika while rushing, so why she should not have told her family or her brother Ekam.

Especially when she usually talks to Ekam and further mentions that maybe she is having an involvement in the recent exploit and thus, she did not make anyone of them familiar with all these in a certain manner. Rupi’s anger crosses all borders and thus, he scolds Shailey and says that she should shut her mouth as she does not know anything, and thus, she needs to be shut.

In the previous episode, the viewers have streamed that Ekam got the location of Malika and therefore he left the place and trace her location so he brought her back at the venue. Thus, he makes his mother make sure that he will definitely bring her back but she does not need to pass such remarks to Nehmat as he is doing her best and Malika had her own thoughts to leave the house on the day of her wedding. So no one is wrong besides her, do not miss streaming the show on Colors TV and for more details stay tuned with us and do follow Social Telecast.