Tonight’s episode of Kumkum Bhagya begins where Sushma calls Dr. Vishal and tells him that she has reached the hospital. Pragya and Sushma both rush to the hospital with unconscious Abhi. They enter the ward where a nurse comes and asks her to fill the form. Meanwhile, Dr. Vishal comes and tells her that first, he will do the treatment then they will do the formalities. The doctor takes Abhi to the emergency ward and Vishal looks at Pragya and asks her about her identity, she tells him that she is the wife of Abhi. 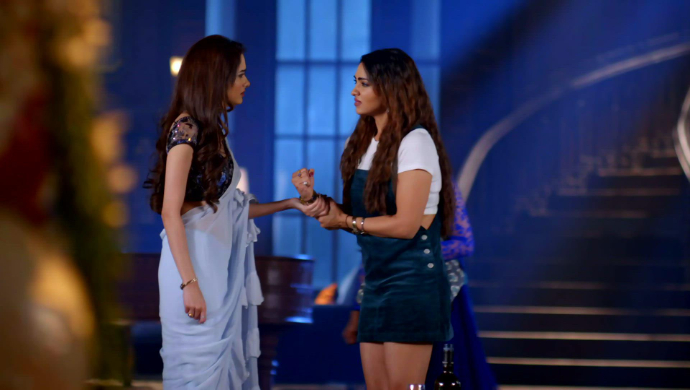 She tells him that Abhi was coming behind her and at that time he slipped from the stairs and fell down. He looks on and asks if there is any specific reason behind it. Sushma says to do his treatment first then Pragya will answer his every single question. Pragya stops him saying Abhi was drunk and he was coming behind and fell down because he was slew at that time. He goes inside for the treatment. Pragya looks at Abhi from the glass, Sushma asks her why she told him about the situation because there is no need to give gossips to people as it was just an accident.

There, Prachi comes to Ranbir and awakes him, he opens his eyes and asks her what happened. She tells him that she was feeling uneasy all night and was also getting intuition that something bad is about to happen and due to this she did not sleep at night. He asks him if she called Maa. She nods saying she did it but Maa did not pick her call and not only Maa but also Papa not picking as well. Ranbir then sits and asks if she called Sushma aunty.

There in the hospital, Sushma brings coffee to Pragya meanwhile, Sushma gets a call from Prachi and she asks her about Maa. Sushma gives the phone to Pragya, she replies that she forgot to bring her phone with her. Prachi tells her that she was not feeling well from the night and asks her if she is fine. Pragya replies yes… She then asks for her Papa, Pragya replies that he is fine as well. Prachi tells her that she was not feeling well, Pragya tells her that Abhi fell down the stairs so she brought him to the hospital but there is nothing to be worried about. Prachi gets tensed and tells Ranbir that they have to go to the hospital as her father is admitted there. The episode ends here, stay connected to know what happened next, also don’t forget to watch tonight’s episode.