Today we are here to talk about the most popular manga series named The Ice Guy and His Cool Female Colleague which is full of Fantasy, romance, and comedy. This series is a Japanese manga series that is written and illustrated by Miyuki Tonogaya. This series has a large number of fan followers around the world and its fans are too like and love this series. Now this series is going to be telecast for the fans of this series and the fans of anime lovers. Here we are going to talk about the release date of the first episode of the first season of this series. 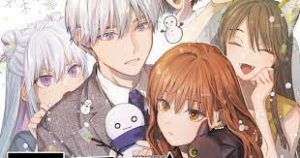 As per reports that the release date of the season 1 first episode is going to premiere on Wednesday 4 January 2023. This series of manga is ranked in 12th place in the web manga category according to the Next Manga Award. The release date of this series is below where this will be released all over time in different zones.

This superb series will be telecast on Tokyo MX, ABC TV, and Nagoya Broadcasting Network in Japan, and the fans of this series can even stream it on Crunchyroll as they have licensed the series but this series will be aired on BS Asahi only on 6 January 2023. Some main characters of this series are Fuyutsuki-san, Himuro-Kun, Komori-san, Otonashi-san, Katori-Kun, and Yukimin. There is a soft kind person who loves flowers and cats named Himuro but of his powers and he cannot get close to them.

This series is an anime that is now going to just start and this series describes the great romantic comedy anime. Romantic comedies are also most liked by too many people and they like that series with pure hearts because watching them makes us feel young and believe in love again. This series is an amine television series adaptation that is produced by Zero-G and Liber and was announced on 21 June 2022. This series is directed by Mankyu and written by Tomoko Konparu. The characters of this series were created and handled by Miyako Kano. This series had already released a total of 7 tankobon volumes which is gained a lot of attention and is most liked by the people.