Adam Carolla, a radio host, and comedian is allegedly seeing stand-up comic Crystal Denha. The news was released in May 2021, 18 months after Adam and Lynette Paradise’s breakup. In June 2006, twins were born to Carolla and Paradise, who had been married since September 2002. Adam broke the news of his divorce from Lynette on his podcast in 2021. He additionally disclosed that they split up a few months prior to the announcement. Check further details regarding the news in the article below. 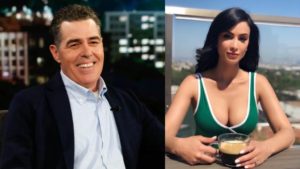 Who Is Crystal Denha?

As per reports, he clarified that no one has cheated on anyone and that it is their attitude that was unable to modify itself in the relationship by expressing that he and Lynette are different and that their ways of thinking are different. Crystal Marie Denha, who was born on February 8th, 1984, is well-recognized for her regular appearances on television. Chris is one of her brothers, and she has never revealed anything about her parents or early years. She was cast in the movie Cousins after making her television debut in ads.

She has additionally starred in Funny or Die YouTube videos. Aside from that, she has been on other programs such as What the F Facts and The Yo Show. The 38-year-old has worked for networks including ESPN, Fox News, and others in the past. She has previously been connected to well-known figures like Jamie Kennedy and Ronnie Fassist. Crystal has 380 posts and over 136,000 followers on Instagram, where she is highly active.

She frequently tweets images from her standup performance. Let us tell you that Adam is known for being the host of multiple shows including The Adam Carolla Show, Crank Yankers, The Car Show, Loveline, The Man Show, and more. Besides, he has also been featured on other reality shows like Dancing with the Stars and The Celebrity Apprentice. He is well-known for his podcast, The Adam Carolla show, which he started in 2009 and which currently has the most viewers worldwide.

Additionally, Adam has appeared on radio programs including Kevin and Bean. The 58-year-old has appeared in movies like Ace in the Hole, Frank McKlusky, Windy City Heat, Jay and Silent Bob Strike Back, and others. In addition to acting in movies and television, he also wrote a few books, the most notable of which was In Fifty Years We’ll All Be Chicks. For more updates, follow Social Telecast.